Behind the Scenes... (Spoiler Alert!) 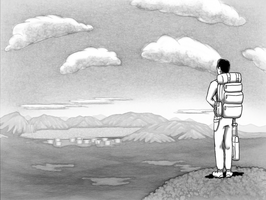 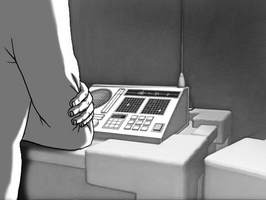 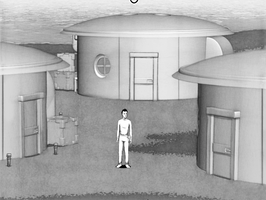 Robert Sheckley is a sci-fi author from the golden age of science fiction. The hallmarks of his work are satire, dark humor, and more often than not, twist endings. One of his novels has been said to be an inspiration to Douglas Adams' The Hitchhiker's Guide to the Galaxy, although this claim is very dubious. The concept of making a game based on the story came to me one morning in early 2016. I sketched up some concept art and constructed an outline a few years later, and was eventually able to condense the project into a nice, GameJam-sized package. Since Sheckley is one of my favorite sci-fi authors, one of the main reasons I made this game was to make other people aware of his material, since (sadly) his work is somewhat obscure. You can read the original story here: https://archive.org/details/Galaxy_v09n01_1954-10/page/n23/mode/2up

In the 90s, Robert Sheckley and Martin Olson were the writers for an FMV adventure game called Cyberhood (a.k.a. Netrunner), which was sadly cancelled shortly before its release. Here are the design document, trailer, a CNN news broadcast about it, and more than 2 hours of video footage.

Ghost V is chronologically the first in the AAA Ace series of short stories (even though it was the second one published). This meant that I couldn't include any references to Rick and Frank's other misadventures in this game, since they hadn't happened yet.

Since "Ghost V" was originally published in a science fiction magazine from the '50s, I tried to duplicate the black and white illustrations featured in those magazines (as well as a very 1950s sci-fi look to the blaster and the spaceships). Most of the other AAA Ace stories were published in magazines, and nearly all of them were illustrated, so I based elements of Rick and Frank's looks (as well as the Grabber's) off of their illustrated appearances as well as their written descriptions (the fourth image is an illustration from a different author's story). 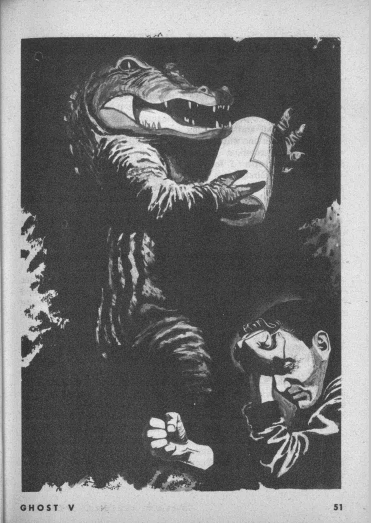 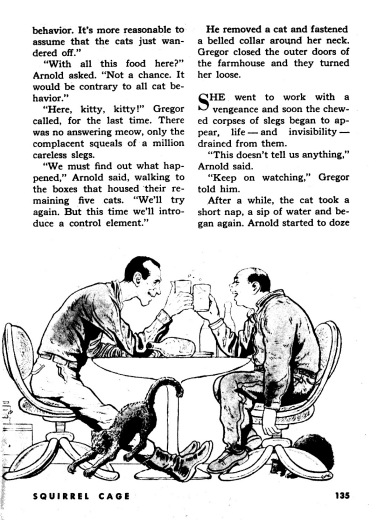 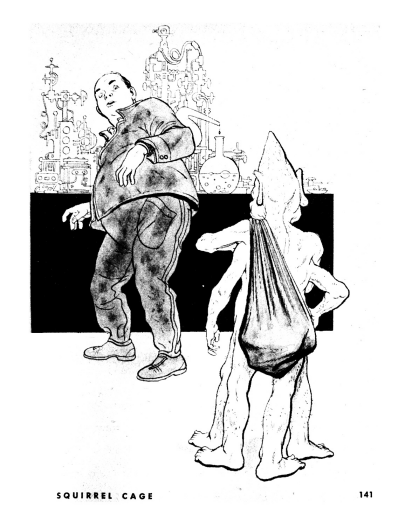 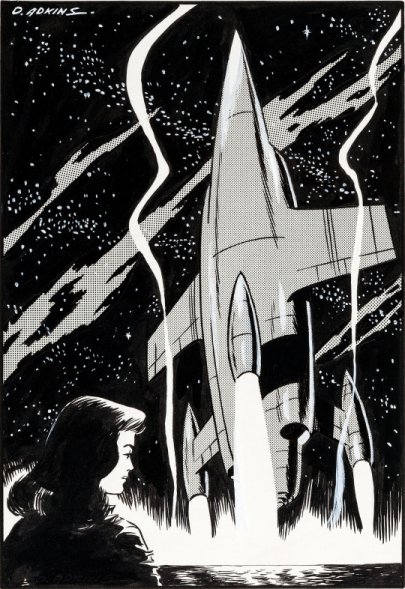 This is the second AdventureJam I've done in black and white. The first was 616 Mock Orange Way (albeit, with a few tiny splashes of color here and there). Like 616MOW, I also kept the amount of animation as low as possible to make the game look like an old comic book. Most of the backgrounds in this game are 3D renders of environments with a flat white material used for all the objects. These renders were touched up in Photoshop, then run through a filter to make them look a bit more more hand-drawn. 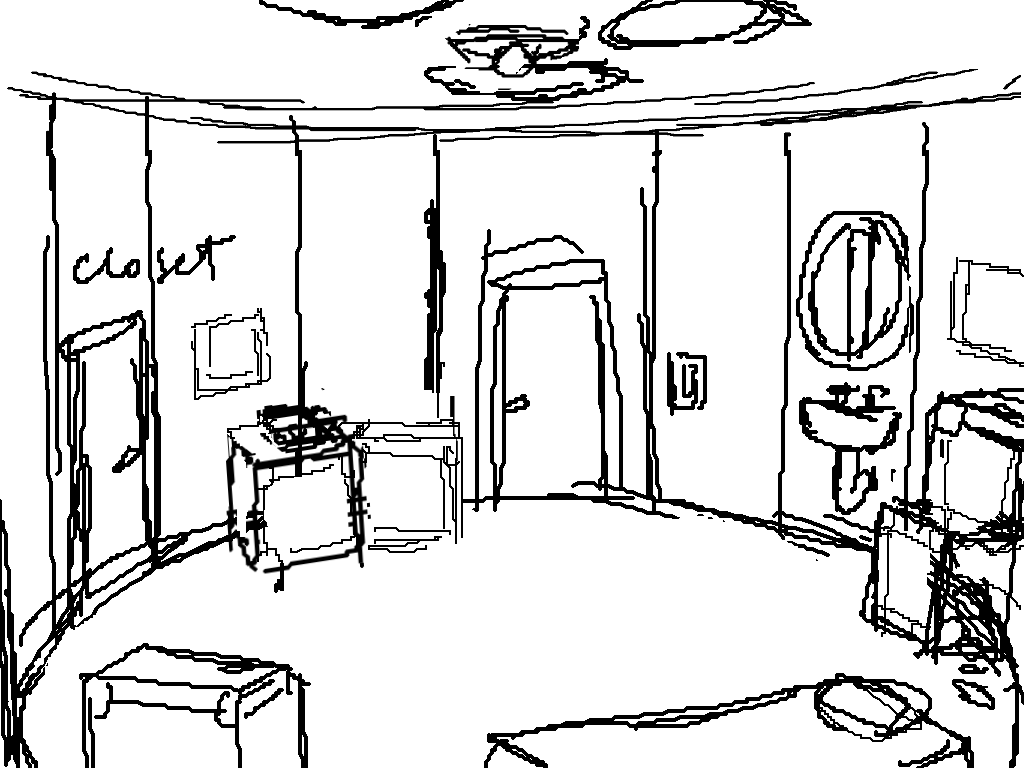 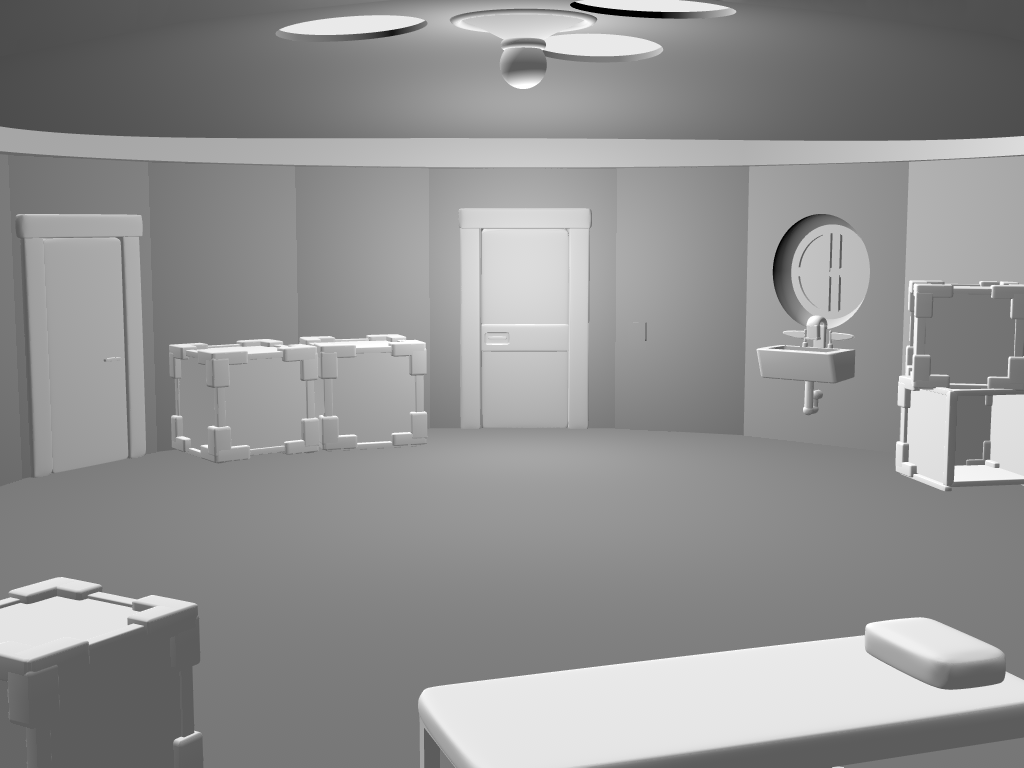 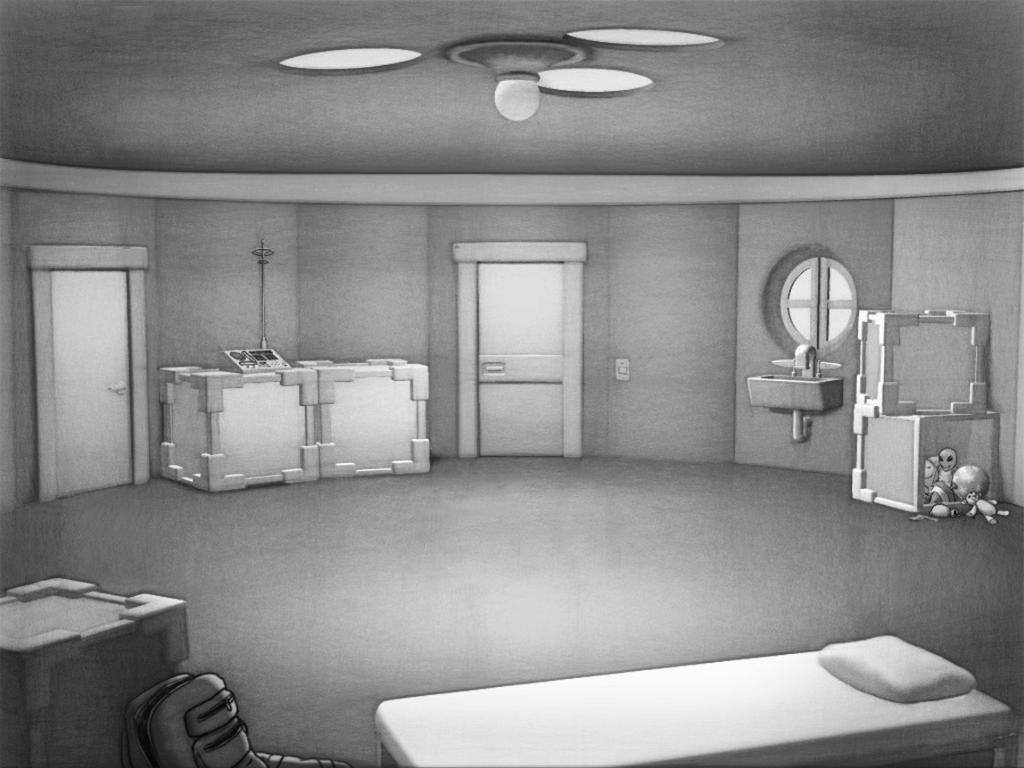 I originally planned on giving the mountains around the settlement dramatically eroded bases (like the mountains in Gehn's age in Riven) with the waterfall cascading off one of the ledges, but decided to give them a more ordinary look, since I thought they might be a bit too distracting to the player otherwise, and I wanted the focus to remain on the settlement rather than the land around it. 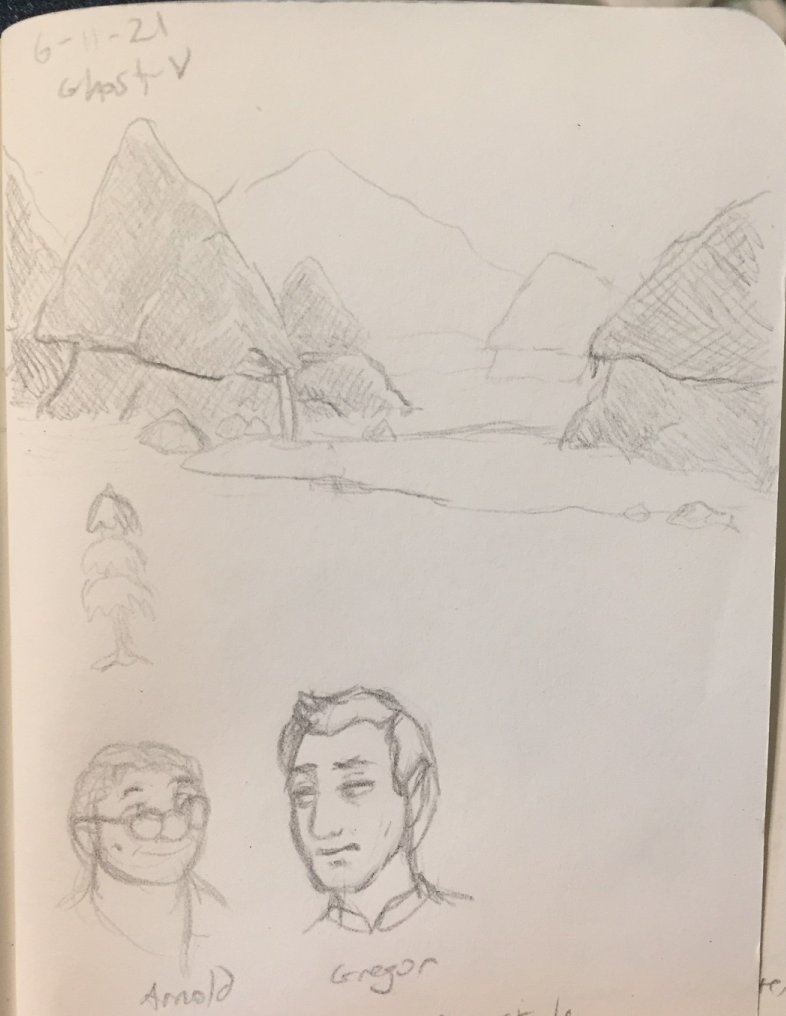 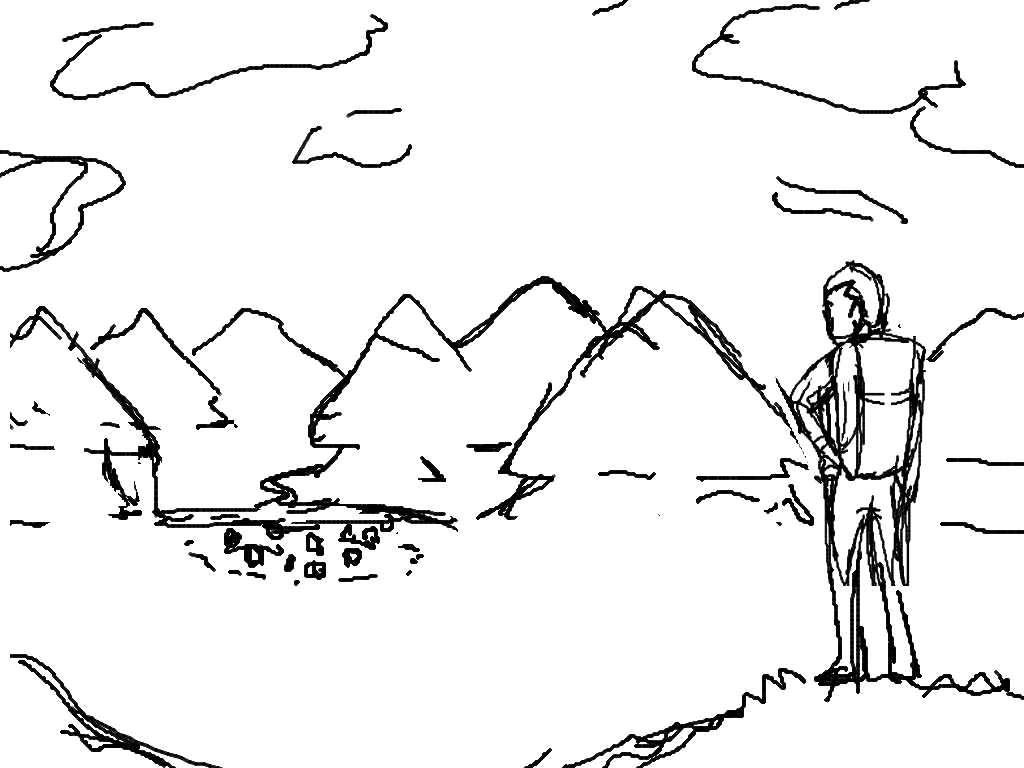 One major decision I decided to make while adapting this story was the main characters' names. In the original story, they are nearly always called by their surnames, even when addressing each other. By modern standards, this seems a bit too formal (especially for two lifelong friends), so I decided they they should call each other by their first names instead.

At first, I was tempted to use a preexisting 3D model for Rick's radio, but my searches didn't yield anything that looked like what I was looking for. However, doing a search for "sci-fi radio model" ended up directing me to a series of sci-fi radio plays from the 80s, which, coincidentally, included a dramatization of one of Sheckley's other short stories, "Shape" (one of my favorites). I was searching for an online version of this story for some time, yet I never found this adaptation until I started work on this game.

Some of the incorrect magic word guesses are words taken from another Sheckley short story, "Bad Medicine."

The Shadower had the least amount of description in the original story. It was originally going to be a vaguely humanoid figure cloaked in shadow with long, bony fingers, but I made a last-minute decision to give it spider-like legs and eyes (and aside from its dying scream, I also voiced it).

Designing the toys was the most fun part of the game, and it made perfect sense for children of sun worshipers to have a plush sun as a toy.

The last anguished roars of the Grumbler are heavily altered recordings of a baby seal begging for milk.

Considering that Rick and Frank's job is decontaminating planets, I really should have stuck in a nod to Space Quest (or at least the phrase "sanitation engineer") somewhere in the script. I didn't, and I apologize.

My first sketch of Rick and Frank: 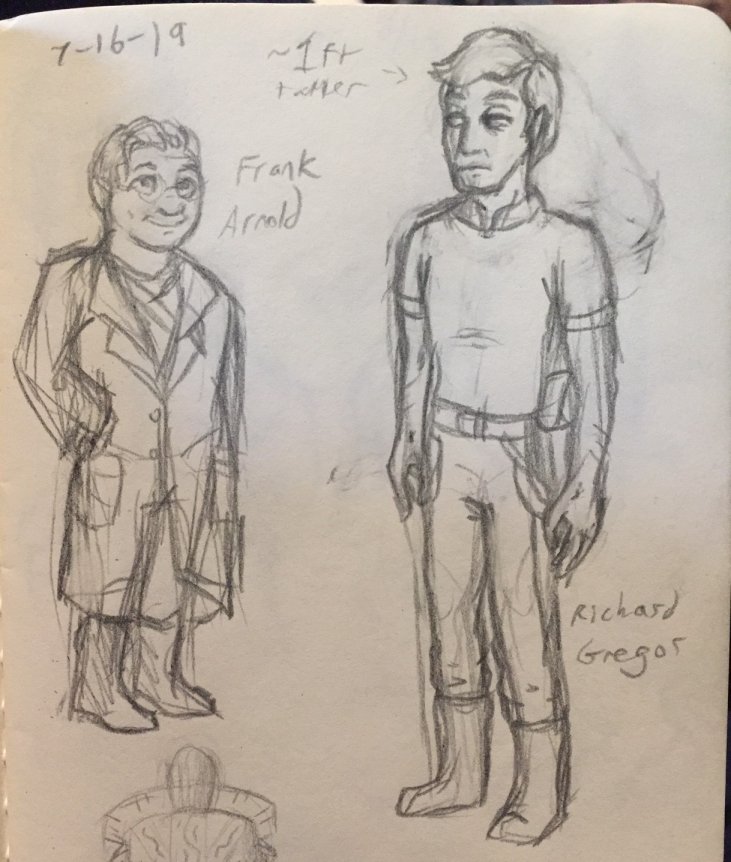 An adventure on a lovely but lethal planet.